ooooooo Nica-ra-gua! some relaxed days on the shores of Lake Nicaragua in Granada were followed with a complete immersion in hostel culture at "the Naked Tiger" - the name says it all... and finally hitting some prime surf spots. Met some very chilled Aussies with who I spent my Birthday at the "Magnific Rock" -again a very appropriate name, the surf 50m down the cliff was extremely fun, spent at least half of my birthday in the water. Big thanks to everyone at the Rock who made the best day of the year a memorable day and night! also learned what it means to have a diversified business strategy - after the morning surf we were approached by a surf instructor, drug dealer and pimp - all rolled into the same person - when we declined all of his three offers one by one, he just threw his arms into the air - probably thinking 'what do these guys want from life'? ...the answer was right there - very content the trek continued to Costa RRRRRRRica!

Pictures from the fun in the sun are here 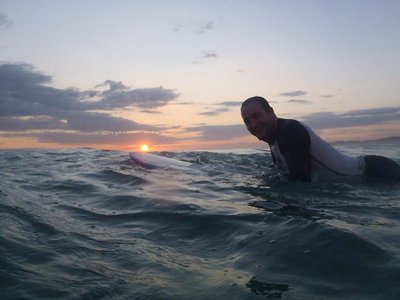 Posted by freddop 18:56 Archived in Nicaragua

Previous Next Table of contents

Comments on this blog entry are now closed to non-Travellerspoint members. You can still leave a comment if you are a member of Travellerspoint.

If you aren't a member of Travellerspoint yet, you can join for free.